I'm not sure which came first, the tutorial on using fusible thread to secure your binding prior to stitching it down, or my seeing some for $2.99 at Vancouver's sewing emporium/destination for Hallowe'en costume supplies, Dressew. This fantastic blog post has many photos to give you a great idea of what it's like in there (a ricrac lover's paradise, for one).

Regardless, I'm so happy I decided to give it a try, because having the binding basted down prior to stitching makes the stitching (by hand or machine) go more quickly. There's no need for binding clips or pins - all you need to do is stitch.

Here's what mine looks like, but there are other brands as well: 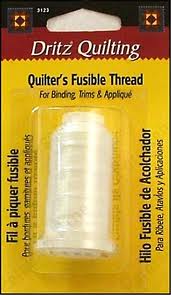 You wind it on your bobbin just like regular thread. I did notice on my machine that as the bobbin is being wound, the bobbin winding slows down as time goes on, and stops eventually even though my foot is on the foot pedal. I'm pretty sure it's because of the friction caused by this synthetic thread as it goes through the bobbin winder parts on my machine. It doesn't seem to happen until the bobbin is about half-wound so it's not a huge deal (for me). 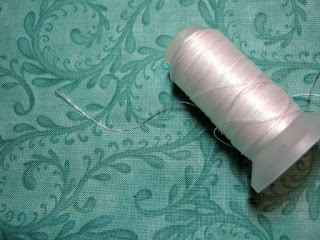 As you can see, the thread itself is quite shiny and slippery, and it pools on the thread spool pretty easily. Sitting the spool on the machine's upright thread spool holder as opposed to its sideways one solved that problem for me.

Following the tutorial I linked to above will maximize adherence of your folded-over binding if that is something that's important to you. Or you can do what I did and combine the step of stay-stitching your quilt's edges prior to trimming, and applying the fusible thread by using it in the bobbin when you stay-stitch. This makes the fusing a little less robust, but it was enough to secure the binding so that I could machine-stitch it down on the quilt's front and catch the binding on the back most of the time (corners were a bit difficult because of their bulk).

Whatever you choose to do, don't rely on the fusible thread to keep a quilt's binding in place forever - it's just for basting. In fact, you can even "un-fuse" the thread by reheating it with an iron - it basically melts the thread away. For that reason, I would not recommend using it in the bobbin thread when attaching your binding (as the package suggests), and you will want to stitch the binding down by hand or machine.

I hope this little "tutorial" helped!
Posted by felicity at 12:00 AM