With my first swap behind me, I have decided to move onto another quilt blogger activity: the Quilt Along!

When Amy announced her Simple Sampler Quilt Along, I remembered that I'd been toying with the idea of making a sampler with the polka-dot fabrics I've been collecting. The universe clearly wants me to start on that Sampler now instead of later so I've joined!

I've decided to depart slightly from her colour suggestions - I'm using more than 8 fabrics, and I'm going to use some of this awesome Kona Chartreuse instead of the white in the blocks (and possibly for the sashing). Wild 'n crazy, that's me! 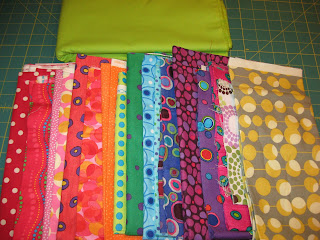 I'm not entirely certain that all of these fabrics are going to make their way into the quilt, but this is my little grouping of dotty fabrics to begin with.